We look forward to offer you a pleasant and relaxing holiday
Fam. Herin 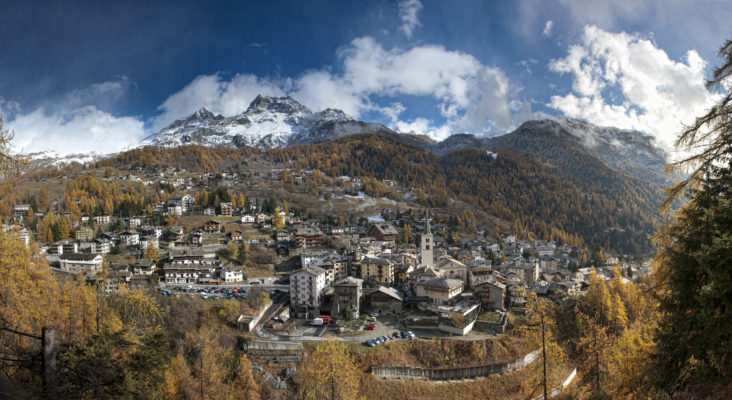 The town of Valtournenche (1524 meters above sea level) is located in a beautiful glen overlooking the valley basin, among vast pastures and woods.

Here is the birthplace of the most famous Cervino guides, which is commemorated in a plaque in the main square of the village.
Even the tourist development of the country is linked to history of mountain climbing. It began towards the end of the last century with the opening of the carriage road; previously, climbers and scholars would reach the town on foot or by mule.

In the Middle Ages the territory of Valtournenche belonged to the Lords of Cly and was then passed to the Savoy.

The parish church of Saint Antonio, whose bell towers over the surrounding landscape, was built in 1856 on the base of a fifteenth century building.

WHAT TO DO IN VALTOURNENCHE

Valtournenche in summer
During the summer there are numerous walks and excursions that you can take. The trip to Cheneil is not too difficult and offers a splendid view over Valtournenche and the Matterhorn in a particularly charming natural setting, among woods, rhododendron and pastures. "Les Gouffre de Busserailles" is another frequent destination for travelers. It is a deep ravine of 35 meters and more than 100 meters long, carved into the rock over time by Marmore River waters, which here overhangs a 10 meter cliff.

Valtournenche in winter
For ski lovers, Valtournenche, under the picturesque Grandes Murailles chain, has developed a vast area between Mount Roisetta and Great Sometta, with glorious views of the Matterhorn. At 2,982 meters high Cime Bianche is also part of the connection to the Breuil-Cervinia and Zermatt.

Cross-country skiing is practiced instead along the Maen track, 6.5 km, and Champlève, 3.3 kilometers.

Check all the offers